The fourth book in the Kelli Storm series is due for release November 24th and will go on pre-sale via Amazon, Kobo, iTunes, Google Play and OmniLit the 17th. Pre-sale price of just $2.99. 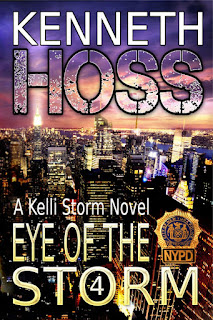 A Russian prostitute’s body is dumped in a Washington Heights park and Detectives Kelli Storm and Eric Ryder catch the case. A note found on the woman’s body with Kelli’s name alongside that of a former Russian mobster lead the detectives to an old nemesis.
When they confront a Russian Diplomat and members of the Russian Brotherhood with little success, they seek the help of an FBI contact who aids them in establishing a connection between the Diplomat and a corrupt FSB Agent, Vladimir Andropov. They uncover a criminal conspiracy between the Russians, a dangerous Mexican cartel and a notorious New York crime family.
When her FBI contact disappears and is later found floating in the East River, other witnesses start disappearing and Kelli is left scrambling to save her case.
As she peels away the layers of death and corruption, she soon finds herself targeted by these organizations, all wanting to eliminate the threat to themselves and their livelihoods and not get caught in the Eye of the Storm.
Posted by Ken Hoss at 07:00