Watch for a new Indie Author in the Spotlight this Sunday

This Sunday I will be featuring Perry Aylen and his book Hexult. Be sure to drop by this Sunday and check it out.
Posted by Ken Hoss at 16:04 No comments:

Now thru July 31st you can get my book, Storm Rising - A Kelli Storm Novel for only 0.99 cents (Reg. Price - $3.99) on Smashwords. Go to Smashwords.com and order a copy today. Enter coupon code BL68J when you order.
http://tinyurl.com/3lrv2zg 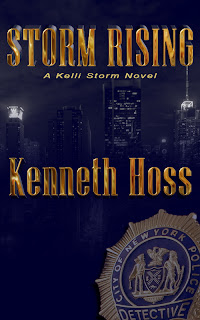 This is a limited time offer, so hurry and get your copy today. Sale ends Sunday!
Posted by Ken Hoss at 11:59 No comments:

Kelli rolled on to her side and looked at Kevin. “I’ve been thinking.”
“You know you can hurt yourself doing that,” he said with a grin.
“Okay, smartass. I’m serious.”
“Sorry, you were saying.”
“Well, you are spending a lot more time here, and I think things are going really well. I was thinking that instead of you keeping your place, maybe you could just move in.”
Kevin shifted, lifted himself up on his elbow and looked at her. “Really? I mean, yeah, things are going great between us, but do you think we’re really ready for that?”
Kelli closed her eyes, took a deep breath and lay back down. “Shit, Kevin, I’m not sure about anything. I just think that maybe we could try again,” she said and looked at him. “I just know that when you’re not here I miss you.”
Kevin leaned over and kissed her forehead. “I miss you too, but don’t you think we should take it slow this time?”
She turned her eyes toward the ceiling and fought back the tears. “I just miss us. I’m not saying that I wasn’t a real bitch during our marriage, I was, but I’ve changed. I’m not drinking any more, and I won’t put my career ahead of us.”
Kevin moved closer and put his hand to her cheek. “If you really want this,” he said, as he leaned in and kissed her, “then we’ll try.”
“I don’t want to make you do anything you don’t want to do, Kevin. Are you sure you want this?”
“Baby, I just want you to be happy.”
She put her arms around his neck, pulled him close and kissed him. She had never loved him more than at this moment, and she knew then that this was the right choice.
Posted by Ken Hoss at 13:20 No comments:

Sunday August 30th, 3:03 P.M. Washington Heights
Broadway and West 184th Street
Kelli walked into the dingy little bar, adjusting her eyes to the sudden darkness. The place smelled of piss and stale beer. It wasn’t her habit to meet a snitch in a place like this, and if her AA sponsor saw her, she would catch hell.
She stood in the doorway a few moments more, giving her eyes time to pierce the darkness. She spotted her informant, Hector Gonzales, sitting at the other end of the bar.
Hector was a big man, and stood a good six foot three. Kelli had busted him a few years back, when she was still on patrol. He was holding up a local bodega. She was in the store at the time of the robbery, and saw that he was using a toy gun.
When she identified herself, he dropped the plastic gun and ran out the door. She caught up with him at the end of the block and nearly took his head off with a garbage can lid. At that time he was addicted to crack and methamphetamine and wasn’t nearly as big as he was now.
He turned his life around after that day, and with her help, got clean. She approached and sat on the stool next to him. He looked over at her and smiled a big toothy smile. “So, Detective, what you need?”
She glanced at the bartender and he walked to the other end of the bar. “What do you know about Carlos Rodriguez and the DDP?”
Hector took a sip of his beer and set the glass down. “I know they’re a bunch of bad motherfuckers. Why you want to know about Carlos?”
“You don’t need to know why, just tell me if you’ve heard any talk on the street,” she said, pulling out a fifty and setting it on the bar.
Hector looked down at the bill and back at Kelli. “I ain’t heard much, but word is, Carlos is moving up. Got himself hooked up with some big guy out of Colombia. Heard the guys uncle was a friend of Yayo.”
Kelli felt her stomach twist in a knot at the sound of the name. “So Yayo’s involved. You got this Colombian’s name?”
Hector shook his head and took another sip of beer. “Ain’t heard nobody say his name, but some say his uncle is Pablo Escobar Gaviria.”
“And just who the hell is Pablo Escobar Gaviria?” she asked, shaking her head.
“Shit, I don’t know. Some big Colombian drug boss I guess.”
Posted by Ken Hoss at 07:16 No comments: