Found the video on here was bad.

Youtube Link
Posted by Ken Hoss at 13:58 No comments:

I just received this from George Arnold, a fantastic graphic artist and husband of my good friend, Author Carolyn Arnold. As usual, George has blown me away. 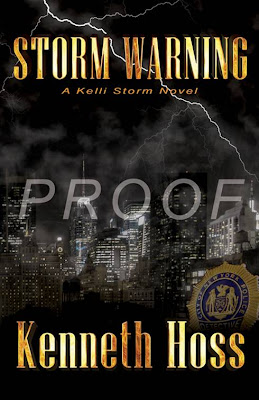 Getting Ready for ~Storm Warning - A Kelli Storm Novel~

Well, the launch date is fast approaching. Storm Warning is complete, with the exception of the cover art and my author pic, which should be ready by the end of the week. It seems as though I have been working on this book for years, while in reality, it's been just over a year. I could possibly had it completed sooner, but unfortunately, life happened. Ces't la vie.

Here is the final draft of the synopsis. What do you think? Comments welcome.

When her new partner is shot during a botched robbery, Detective Kelli Storm never expected that the trail of the shooter would lead her to Colombian drug lord Miguel Garcia; the man who’s cousin she had killed months earlier, and had made numerous attempts on her life. A man she had believed to be dead.
Detectives Kelli Storm and Eric Ryder follow the bloody trail of a notorious drug kingpin from the streets of Washington Heights, New York and south to Medellin, Colombia.
When the suspect in her partner’s shooting is killed while in custody, the man makes a startling deathbed confession. With this revelation, Kelli finds herself unwillingly thrown back into the world of the drug cartels. With the aid of DEA Special Agent Gregory Larsen and Narcotics Detective Javier Vasquez, Kelli works to stop the Cartel’s operations in the city, and bring down the notorious drug lord.
Posted by Ken Hoss at 17:19 No comments: