The M.E. identified the five bodies from the building. The four men she didn’t recognize were all Puerto Ricans. The Dominican gangs and Puerto Ricans had an ongoing rivalry, especially when it came to their turf. Kelli already knew the fifth man, Francisco Trujillo.

The shell casings were all 9MM and CSU recovered twenty-five of them. They only pulled one usable partial print off a shell casing, which made her smile. The partial put Carlos Rodriguez at the scene, making him one of the shooters. Now, she had enough for an arrest warrant.

Kelli and the rest of the squad waited down the hall as the ESU team made their approach. The tactical unit reached the door and made ready. One man stepped up and broke it in with a ram.

As soon as the door swung open, ESU poured inside, shouting for the occupants to drop their weapons. Several more shouts came from inside the apartment as they cleared each room. Frank took the lead and headed in. Kelli and the other detectives followed.

When she stepped inside, Kelli saw Carlos and the two men from the shooting in Brooklyn. There were four other men she’d never seen before and figured them for new recruits to the DDP. ESU had them all lined up on their knees, hands on their heads. Carlos met her stare with a scowl, his eyes glowing with contempt.

Kelli turned her head and looked at Frank. “Yeah, I’m good. I’ve got this son of a bitch.” She walked toward Carlos and took her handcuffs out as she stepped up behind him. “Carlos Rodriguez. You’re under arrest. You have the right to remain silent, but I know what a big mouth you have, so feel free to say anything you want. You have the right to an attorney…” She continued reading his Miranda rights as she placed the cuffs on his wrist, cinching them as tight as the metal would allow.

The other detectives proceeded to handcuff the crew. Kelli hauled Carlos to his feet and led him out the door. “I’ve got you this time, Carlos.”

“You ain’t got shit, bitch.” He turned his head and spit in her direction.

She lifted up on the cuffs, causing him to pitch forward. “Do that again, asshole, and you’ll be going to the hospital instead of the precinct.”
Posted by Ken Hoss at 07:39 No comments:

Suspenseful page-turner,
By
Amazon Customer
This review is from: Storm Rising (A Kelli Storm Novel Book 1) (Kindle Edition)
Kelli Storm is as feisty as she is brave and smart. With a full plate in her personal life, she tackles a case that puts her and everyone around her in danger.

This is the first in a series and is a page-turner, breath-taker from start to finish. It's gritty and smart and has well rounded, engaging characters. This is definitely a series to watch
Amazon 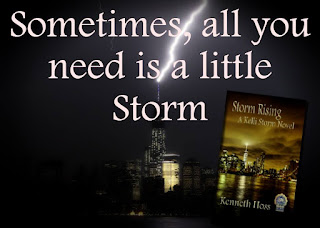