Follow the link to my publishers page to see the latest cover.

Cover reveal! Thanks to Patti Dunn Roberts​ at Paradox Book Cover Designs​ for this great cover. (All of them.)

http://www.threeworldsproductionsllc.com/2015/10/15/its-a-cover-reveal-thursday/
Posted by Ken Hoss at 07:02 No comments:

Deadly Storm (A Kelli Storm Novel 3) is set to release October 29th. I am having a launch party on Facebook and there will be prizes and giveaways. Check the page for further details. I will be posting the prizes and giveaways this Sunday. Open to the public. Invite your friends and family. Also, book 2 will be available in print on the 29th. 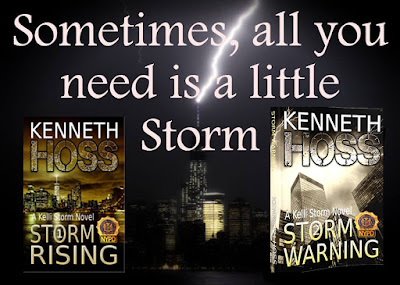 Now Available from all eBook Retailers

Out of fifteen rounds, she only put nine in the ten ring, and she knew for certain it wasn’t the Glock. She hated to admit it, but Kevin may have hit on the problem, even though she didn’t want to believe it. Why am I letting this get to me? Shit, I’ve been through a lot worse in the last year or two, so why should this case be any different? Maybe it’s not just the case. I went through so much with mom between the Alzheimer’s, the kidnapping and watching her die. And this thing with Kevin…whatever it is…it’s a miracle I haven’t crawled back into the bottle.

As she and Kevin made their way to his Expedition, the sound of an engine revving and the squeal of tires caught her attention. She turned her head in time to see a black Chevy Tahoe coming toward them. She yelled at Kevin and they both ran, taking cover in front the Expedition as the Tahoe closed on them, its passenger side windows down.

The Tahoe screeched to a stop as automatic gunfire erupted from the open windows, pelting the Expedition, shattered glass flying in all directions. Just as quickly as it started, it stopped. The Tahoe sped out of the parking lot and onto the street, its tires screeching as it sped away, headed west toward the Major Deegan Expressway.

Kelli watched as it as it sped out of sight. “How in the hell did they know we were here?” Kevin sat hunched over on the ground, blood pooling on the asphalt. She reached out for him, her vision clouding with tears. “You’ve been hit.”

He stared up at her, his face pale. “Caught me in the left side, not sure if the bullet is still in there or not.” He moaned and fell toward her. 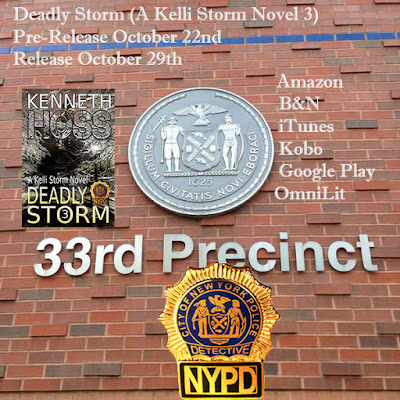