I had my first book signing today. While it was not a great success, it was an experience. I found that I have more fans than I thought. Here are some pics of the "inaugural" launch of the paperback version of Storm Rising. 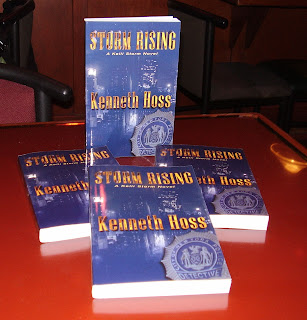 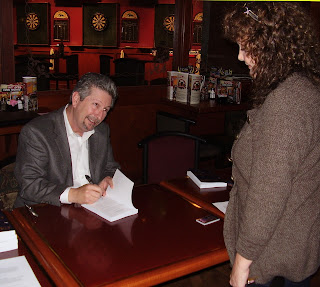 Signing for a new friend 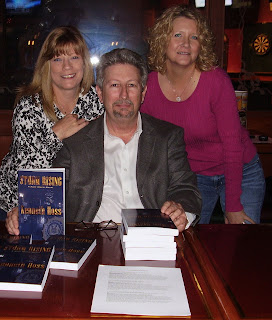 Two of my biggest fans
All in all it was a good day. I'll be doing another signing at the Half Price Books in Arlington, TX at Lincoln Square on Road to Six Flags in the near future. Keep checking back for updates.﻿
Posted by Ken Hoss at 23:21 5 comments:

I was playing around with an on-line translator today and thought it would be fun to see what my book would look like in a different language. I'm not sure if it translates all that well. My French is a little rusty, so any comments would be welcome. Maybe I'll try German next.

Be sure to stop by and check out my latest interview on Matthew Young's blog.


http://matthewgyoung.blogspot.com/
Posted by Ken Hoss at 18:29 No comments:

Monday October 26th, 9:48 A.M. Manhattan
Tenth Avenue
– DEA Offices
Kelli sat the folders on the desk, pushed them across to Agent Larsen and sat down. “This is everything I have on the DDP and Trinitarios. You’ll also find copies of my case files on the murders of Raul Flores and Roberto Guevara. Guevara was the head of the local DDP, he took over after Carlos Rodriguez and two of his lieutenants were murdered earlier this year.”
Larsen opened the file on Guevara and began flipping through the paperwork. He stopped when he came to the crime scene photos. “Is that what I think it is?” He asked as he looked at Kelli.
Kelli nodded. “A Colombian neck tie. That’s exactly how Rodriguez and his men were found. Somehow I don’t think it’s a coincidence.”
Larsen shook his head, put the photo back in the file and closed it. “So what is it you want?”
“I need you to flush Garcia out of hiding. Call it a gut feeling, but I just know the son of a bitch is still alive.  You’ve read Farnsworth’s files, so you know he tried to kill me and failed. If he’s still running the Cartel, and I’m sure he is, it’s only a matter of time before he tries again.”
Larsen leaned back, crossed his arms and tilted his head back. “Let me see if I’ve got this straight. You want me to use DEA resources to flush a dead man out of hiding?”
“But he’s not dead. Are you telling me that with all the evidence, you guys have stopped looking for him?”
“What evidence? A few black and white photos of his compound and some bodies. Just because they didn’t find his body, that doesn’t mean he survived. We’ve got too many ongoing operations to hunt down a dead man.”
Kelli closed her eyes, let out a sigh in exasperation and looked at Larsen. “Hell, I thought you were different, but you’re just as bad as Farnsworth. He didn’t learn from his mistakes either,” she said and stood. “I guess that’s my mistake.”
She reached to retrieve her files and Larsen pulled them closer. “I didn’t say I wouldn’t help, I just have to figure out how to do it. It’s not going to be easy, so you’ll have to give me a few days, okay?”
Kelli pulled her hand back and straightened up. “So you do believe me?”
He stood and walked around the desk. “Since taking over for Farnsworth, I’ve had a chance to read all of his files, at least the ones pertaining to my job. From what I’ve gathered, this Garcia is a very smart and dangerous man. So no, it wouldn’t surprise me if he were still alive.”
Kelli looked up into his eyes and could see the sincerity in them. She smiled and nodded. “Okay, a few days. I’ll wait for your call.”
Posted by Ken Hoss at 07:32 No comments: