Just got the cover art for book three, Deadly Storm, and as always, George Arnold at WGA Designs has blown me away. 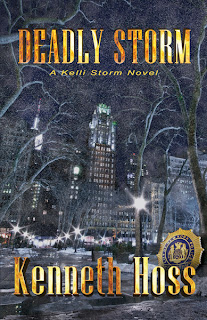 Detective Kelli Storm and her partner, Eric Ryder, are called to the scene of an apparent suicide only to discover that the victim was a Russian hit man and Kelli was to be his next target.

The trail from the body leads the two Detectives to the underbelly of Brighton Beach, and the Russian Brotherhood that rule there. During the course of their investigation, Kelli discovers a link between them and a powerful Colombian Cartel, the same Cartel she thought had been shut down with the death of its leader.

When the FBI and DEA take an interest in the case, they forge a plan to break up the international drug ring. As they delve deeper, the Cartel and Brotherhood become bolder and they both want Kelli dead. To make matters worse, after an ill-conceived tryst, it’s all she can do to keep her professional and personal lives separate.

George always does a great job and has never disappointed me. Thanks, George.

If you need cover art for your next project, I highly recommend WGA Designs. (See link on right sidebar.)
Posted by Ken Hoss at 07:54