Madison Knight is back! Giveaway with Carolyn Arnold

If you haven’t already, meet Madison Knight, the chocolate-loving detective, who is determined to solve murder and find justice for the victims—even if that means coming into contact with the sight of blood.

However, in Found Innocent, the latest release in the series (releasing October 16th!), she doesn’t have to face too messy of a crime scene, at least in one sense. What she does have to deal with is whether or not she’s willing to jeopardize departmental relationships and cross the wall of blue.

Here, this is what it’s about:

There's one code when it comes to the wall of blue…and Madison Knight may have to cross it.

Any good cop knows you never report a brother for mishandling a case or accuse him of misconduct, but in order to find justice, Madison may not have a choice.

Lacy Rose had one goal for her twentieth birthday—to be found innocent of past sins—but her life is cut short.

When Lacy's remains are found in a garden and the investigation becomes connected to a closed case, Madison must face her past. The lead detective on that case was Madison's ex-fiancé. At the risk of jeopardizing departmental relationships, and churning up the attention of an old flame at the same time, Madison must push hard before the guilty are found innocent.

“He didn’t do it!”
The hysterical shouting pulled Madison’s attention from her monitor to a woman rushing toward her.
The station was supposed to be quiet today. Sunday. She wasn’t required to be there, and that made it the perfect day to dig into her cold case.  She was so close to getting answers.
With one more longing look at her screen, Madison rose from her chair and held up her hands to stop the woman.
“Detective Knight.” She stated this as if they had met before.
Officer Ranson, the female officer who manned the front desk, came up behind them. “Come on—”
Another officer brushed past Ranson and slipped his hands under the woman’s arms. “Let’s go.”
He pulled on her, but she stayed still. Her eyes steadied on Madison.
“Please help me.” She attempted to shake loose from the officer’s grip.
Her frown lines were deep burrows, her eyes were sunken, and the flesh around them was puffy.  She appeared to be rough-edged, but there was something desperate about her, and she didn’t seem to be a threat to the lives of anyone here.
“I’ve got this,” Madison said.
“All right, your call.”  The male officer let go of the woman, and he and Ranson left.
“I saw your face in the paper.” The woman held up the Stiles Times. “It’s you, isn’t it?” Her lashes were caked with mascara, and she blinked slowly. Madison wondered if the cosmetic had sealed her eyes shut.
Madison passed a glance to the paper. It captured a moment she wished to forget. A day when she had been forced to speak in front of a crowd and to take pride in the job she had done. The thing was, though, a good cop couldn’t care less about the recognition.
The woman sobbed, yet her tears didn’t affect her makeup. “He wouldn’t do this…”
Madison summoned patience.  A list of envelope-printing companies—which could prove to be a vital link in the chain of evidence against the Russians—would be on her monitor, right now.
She took a deep breath, passed another glance to her computer, and turned back to the woman.  “Come with me.”
Madison kept the woman to the side of her. Her first impression was the woman didn’t pose a threat, but she still wasn’t willing to sacrifice her back by leading the way into the room.
Inside, Madison gestured to a chair.
The woman dropped her red bag heavily on the table. It was large enough to serve as a duffel bag. She pulled off her jean jacket, folded it over the back of the chair, and revealed a pink sweater that displayed more cleavage than Madison could ever hope to see on herself. The woman went rooting through the duffel bag and she stuffed a stick of gum in her mouth.  She worked at chopping it into a soft, pliable distraction. It snapped in her mouth.
“Let’s start with your name—”
“Vilma with an ‘i’. Vilma Thorne, well, it would have been. My God, Kev!” She raised her face upward as if calling out to a Greater Being. Her gum chewing paused only momentarily.
“Vilma—” Madison had to tune out the noise and the display of her open-mouth chewing.  “Let’s start at the beginning. Why are you here?”
Vilma stuck a finger through one of the large gold hoops dangling from her ears and leaned in.
Madison detected the blend of cheap perfume and cigarettes. Maybe—she inhaled deeper, trying not to appear obvious—it wasn’t perfume but whiskey. It was hard to discern. Her eyes appeared normal, except for the abuse of eye makeup. Besides the thick mascara, her lids were weighed with the color purple. Her pupils weren’t dilated or pinpricks.
Still, she didn’t respond to Madison’s question.
“Okay, Vilma, if you need my help, I need you to talk to me.”
Possibly this woman was on a new line of drug that disguised itself behind brilliant colors? Maybe this was a mistake and Madison should have let her get hauled away.
“My family is against what he did. But he didn’t do it!” Her voice rose, tears flowed. She stopped chewing and, sniffling, went rooting in the duffel bag again. She came out with a bunched up tissue and wiped her nose.
Madison’s tolerance level had almost reached its limit. “You keep saying he didn’t do it.  Do what?”
A tissue still pinched on the tip of her nose, Vilma said, “He didn’t kill himself…someone killed him.”

The Madison Knight Series is a clean, murder mystery series meaning mild graphic violence and language. Each book is self-contained so you can read any of the books, and out of order, if you wanted to.  Books in the series in released order: Ties that Bind, Justified, Sacrifice, Life Sentence (Prequel in which Madison has a cameo role), and Found Innocent. 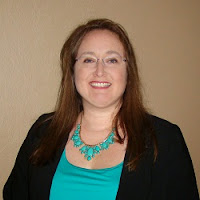 Carolyn Arnold started to take writing seriously six plus years ago when a co-worker said “tell me a story”. Since then she’s written nine novels and has plans to write many more. She has a love for the canine world and has two beagles that are affectionately named Max and Chelsea. Like her female protagonist Madison Knight, she loves her chocolate and has been known, on occasion, to speak her mind.

a Rafflecopter giveaway
Posted by Ken Hoss at 09:04