Pleased to announce that book 1 in the Kelli Storm series, Storm Rising, is once again available. As some of you may know, I had published before with Three Worlds Press. Unfortunately, they went out of business and it took some time to find and work out a deal with a new publisher. I am now with Fountain Blue Publishing, and looking forward to a long and successful relationship with them. They have contracted the full series and book 2 is in the pipeline ready to be assigned to an editor.

You can get your copy of Storm Rising, in eBook or paperback. It is available on Amazon, Barnes & Noble, iTunes and Kobo, in eBook format. The paperback can be purchased through Amazon for $13.99, and the eBook version is $4.99. Get your copy today. 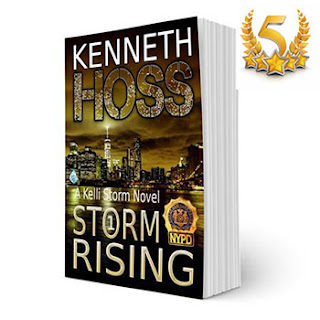 
When a murder investigation turns Detective Kelli Storm’s attention to a drug kingpin, the last thing she expected was to find a link to her father’s killer from twenty years earlier. The Washington Height's neighborhood has turned deadly for NYPD detectives Kelli Storm and Bill Hayes. A young woman is murdered and Kelli tracks the killer to a Gentleman’s Club in Manhattan. After an unwilling witness is assaulted and left dying, Kelli and Bill turn their investigation in a new and more dangerous direction. When the DEA steps in and takes over, Kelli is forced off the case. Working behind the scenes, she pulls out one of her father’s old case files and starts making connections she never would have dreamed possible. An old gun, new witnesses and danger lurking in the shadows have storms rising all over New York City.

***** Review: This is the first in a series and is a page-turner, breath-taker from start to finish. It's gritty and smart and has well rounded, engaging characters. This is definitely a series to watch!

***** Review: STORM RISING is a suspenseful page-turner. Couldn't put it down until read entirely! Many twists and turns. The main character, Kelli Storm, is an aggressive and assertive female detective who bends the rules to seek justice. In doing so, the reader doesn't know what's coming!