Got word from my publisher today that book 2 in the Kelli Storm series will be launched on March 3rd. The promotional price for the eBook will be $2.99 until March 31st. I will also be giving away a free eBook copy of book 1, Storm Rising, to one lucky reader. Check back for the contest rules. 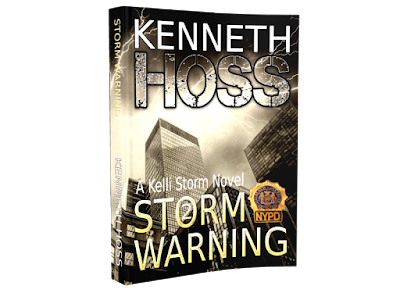 When her new partner is shot during a botched daytime robbery, Detective Kelli Storm never expected that the trail of the shooter would lead her to Miguel Garcia, the man who killed her previous partner and made several attempts on her life.
Detectives Kelli Storm and Eric Ryder follow the bloody trail of a notorious drug kingpin from the streets of Washington Heights, New York and south to Medellin, Colombia.
When the suspect in her partner’s shooting is stabbed while in custody at Rikers, he makes a startling deathbed confession… Miguel Garcia is still alive and out to kill her.
With this revelation, Kelli finds herself unwillingly thrown back into the world of the drug cartels. With her life on the line, Kelli doesn’t back down. Aided by DEA Agent Greg Larsen and Narcotics Detective Javier Vasquez, Kelli works to stop the cartel’s operations in the city, and bring down the man hell-bent on seeing Kelli dead.
Posted by Ken Hoss at 18:55